HarvEST:Barley and the Affymetrix Barley1 GeneChip

Harvest:Barley includes  the information that was the basis of the Affymetrix "Barley1" microarray chip content described in Close et al. (2004) and Close (2005). HarvEST:Barley (version 1.65; 556 MB Windows installation file or online version) contains special features for viewing the chip content. This includes updated and extended gene annotations, and export tools so that this information can be integrated into users' local databases. Development of HarvEST:Barley has been supported by the USDA Plant Genome program and the NSF Plant Genome Research Program.

Close TJ. 2005. The barley microarray: a community vision and application to abiotic stress. Czech Journal of Genetics and Plant Breeding 41: 144-152.

The Barley1 GeneChip is the Product of Worldwide Cooperation

The Barley1 GeneChip was the culmination of a vision and cooperation of the worldwide barley community. Barley EST sequences (approximately 400,000) were gathered from worldwide colleagues by Timothy Close at the University of California, Riverside. Colleagues at Iowa State University (Dan Ashlock, Roger Wise) parsed about 1000 additional sequences from the GenBank nr database and provided several sequence related to a region of the barley genome containing a Blumeria resistance gene. Additional colleagues proposed transgene sequences.  EST sequence data were processed by Wanamaker and Close using phred, cleaned of vector & cloning system oligos using cross_match, scanned with BLAST to identify and remove rRNA clones and various contaminating sequences, then assembled.  The sequence assemblies in HarvEST:Barley were produced using MegaBLAST followed by CAP3 using TIGRs TGICL management tool by Steve Wanamaker at the University of California, Riverside. Chimeras were removed by Close, Wanamaker and Jan Svensson (University of California, Riverside) using semi-automated inspection of contigs and singletons. Following this process, additional sequences related to possible transgenes were added to the chip content. Representative sequences (exemplars) were then transmitted by Wanamaker and Close to Affymetrix for oligo design. The chip was produced as part of the USDA-IFAFS project, "An Integrated Physical and Expression Map of Barley for Triticeae Improvement". A more detailed list of those in the barley community who contributed to chip content is given below.

Excerpt from "The Barley Microarray. A Community Vision and Application to Abiotic Stress", International Barley Genetics Symposium, Brno, Czech Republic, June 2004 with one addition (Australia) and Czech Journal of Genetics and Plant Breeding 41:144-152 (2005).

Most of the EST data contributors and their barley EST projects are cited below.

·        Institute of Plant Genetics and Crop Plant Research (IPK), Gatersleben, Germany: Andreas Graner, Nils Stein and Winfriede Weschke with support from Hangning Zhang, Elena Potokina, Volodya Radchuck and Jelena Perovic. Barley ESTs from the project "Partial Sequencing of cDNAs for the Generation of Expressed Sequence Tags (ESTS) of Barley" funded by the state of Saxony-Anhalt.  Libraries and funding for these ESTs also provided by the project "An Expressed Sequence Tagged (EST) database of barley"  (Andreas Graner and Peter Landrigde PIs), funded by the Grains Research and Development Corporation, Government of Australia.

·        Okayama University, Japan: Kazuhiro Sato, Daisuke Saisho and Kazuyoshi Takeda.  National Institute of Genetics, Japan: Yuji Kohara and Tadasu Shin-i. ESTs from the collaborative project between the Barley Germplasm Center, Okayama University and Center for Genetic Resource Information, National Institute of Genetics. This project has been supported by a Grant-in-aid for Scientific Research on Priority Areas C from the Ministry of Education, Culture, Sports, Science and Technology (MEXT) of Japan and by CREST (Core Research for Evolutional Science and Technology) of  JST (Japan Science and Technology Corporation).

Further Comments on the Assembly Used for the Barley1 Chip

As shown in the diagram below,  the content of the Affymetrix Barley1 GeneChip was directly derived from a subset of HarvEST:Barley Assembly #21. Only the unigenes from Assembly #21 that had "good 3' ends" were transmitted to Affymetrix as exemplars, and of these only about 90% reached the final subset that was used directly for chip content design. The final subset of exemplar sequences unigenes from Assembly #21 is referred to as "Assembly #25". Judging by the number of rice and Arabidopsis gene models in Assemblies #21 and #25, it appears that the Barley1 GeneChip represents about 2/3 of the genes represented by Assembly #21 unigenes. Assembly #25 was also provided to colleagues at Iowa State University to be used as a core element of BarleyBase. Both assemblies are maintained in the HarvEST:Barley database and are available to others directly from Wanamaker and Close upon written request. 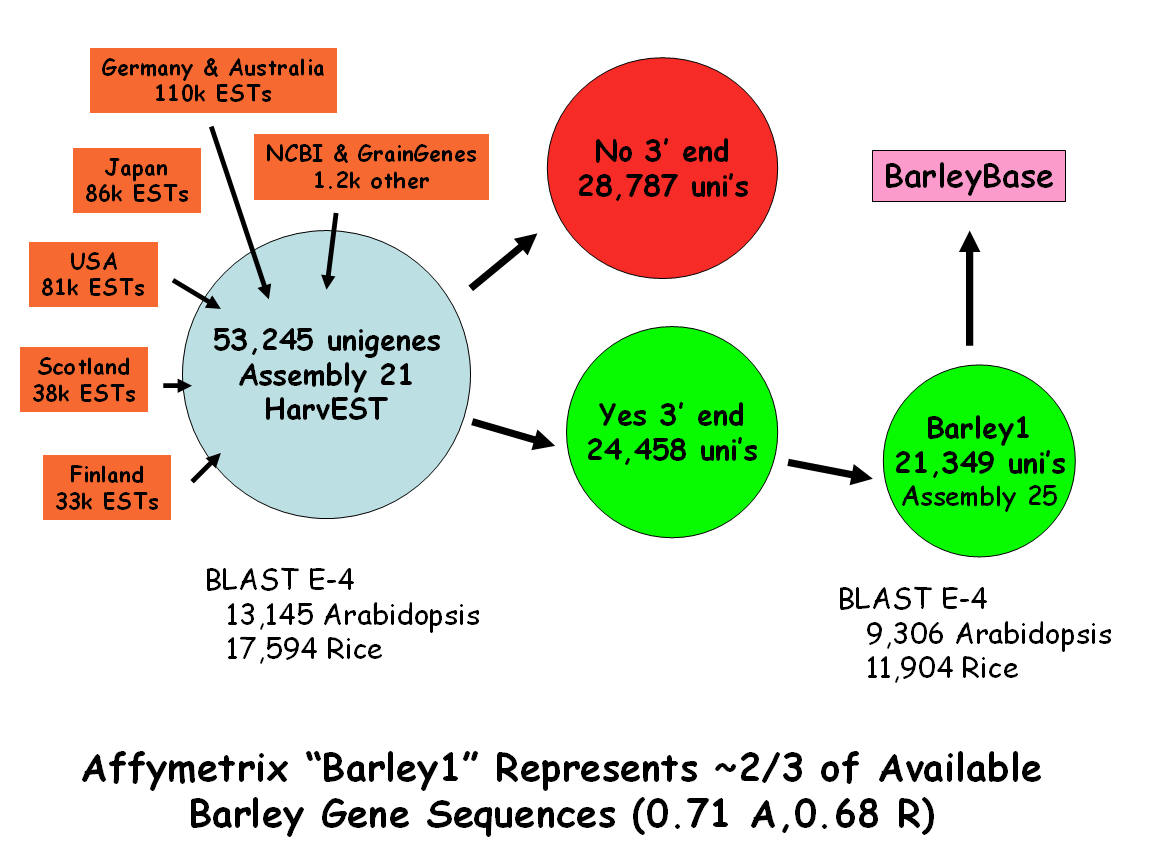 Comments on the Annotations Used for the Barley1 Chip

The November 2002 annotations of Assembly #25 unigenes were used as the formal annotations of the Barley1 GeneChip. In many cases, superior annotation existed for other, related Assembly #21 unigenes at the time of chip design. Also, reference databases have continued to improve since November 2002. Given the importance of correct annotation of probesets for data interpretations, HarvEST:Barley provides a powerful annotation tool to help Barley1 users make the most meaningful interpretations of data. These functions are available through "Search the Barley Chip" from the HarvEST:Barley Main Menu, as illustrated below. 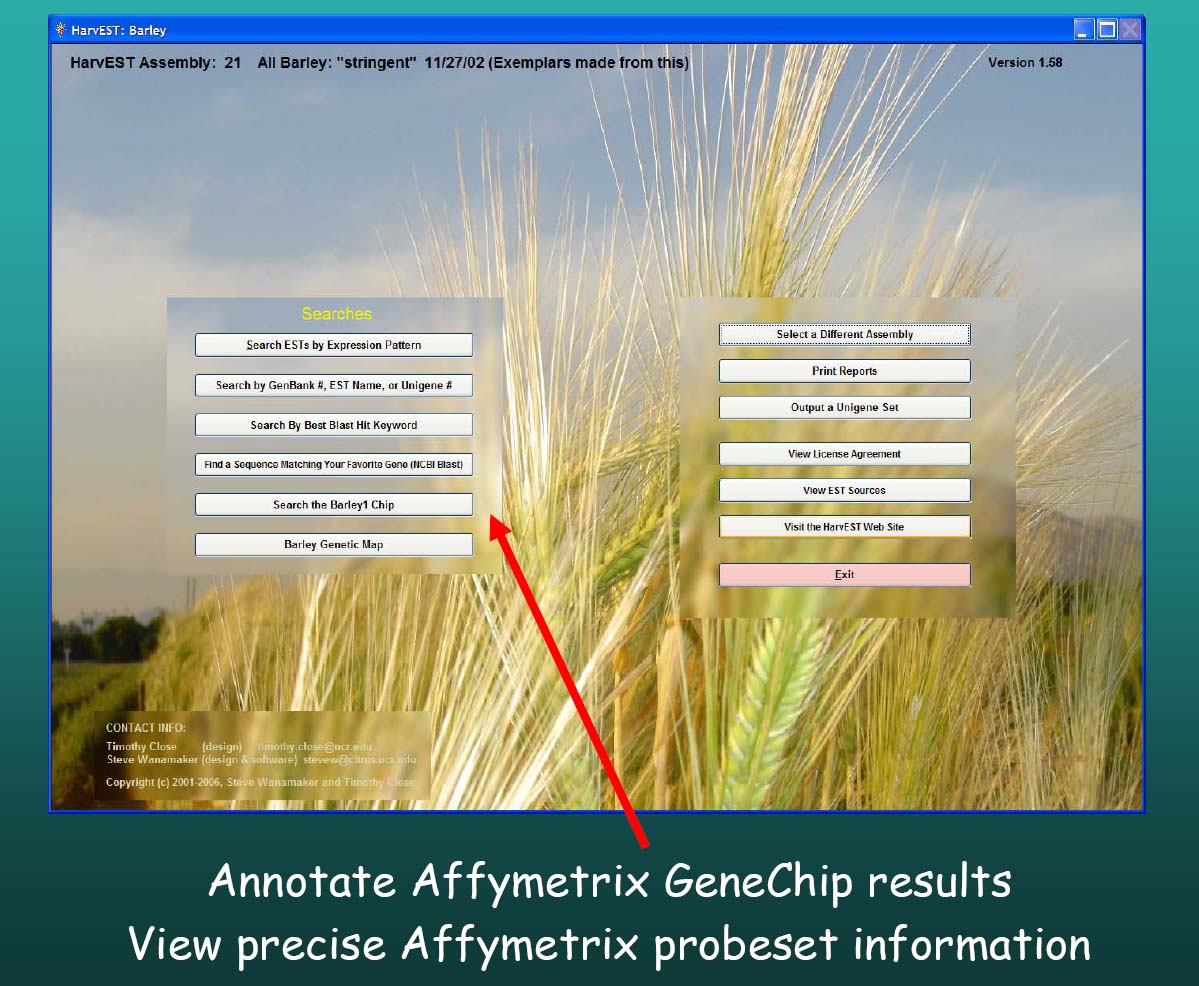 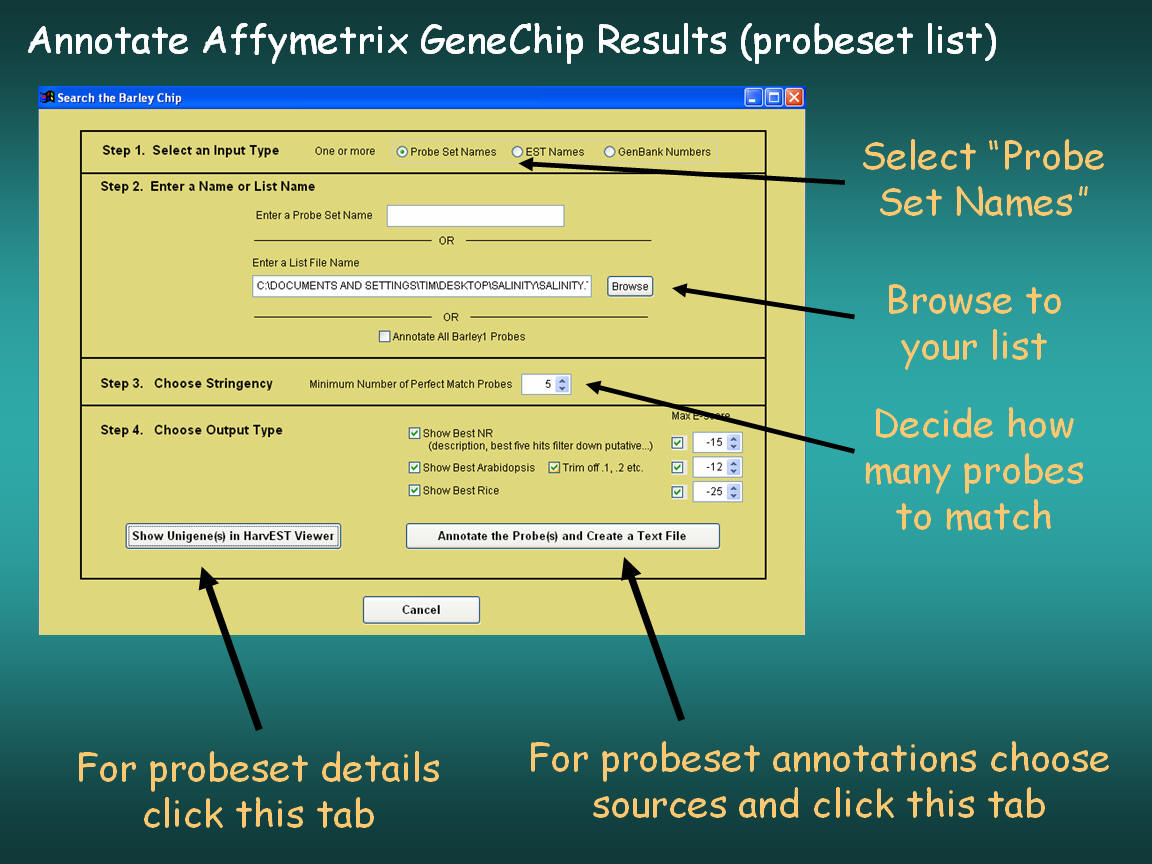